eBooks - a potted guide to what I wanted to know


A great session at weelearning recently left me fired up and thinking about ebooks like I've never considered before.

What's the problem with ebooks?

I've had a number of ebook readers on my Android phones but have always been bamboozled by their boasts about compatibility with dozens of formats. In the absence of a simple choice, such as you have with  as with audio's MP3 format, I've never known which was the one to turn to, and as a consequence I've never thought of publishing ebooks as something I should really bother with. Stick it in a PDF and be done with it was my internal line, even if I'd never explicitly rationalised it as such.

Wikipedia's airy breeze of impartiality on the topic doesn't really help - it lists more formats than even the most comprehensive ebook apps claim to handle and by the time you realise it's including HTML in the list you start to wonder what exactly constitutes an "ebook".

Which was nearly the starting point for Zak Mensah's talk, but that he took it one step further and asked "what is a book?" He explored a couple of options, including the delightfully simple "anything that takes more than an hour to read" but since that rules out The Gruffalo, and no-one should rule out the Gruffalo, I think that you might usefully say "a book is whatever you damn well want it to be."

Sadly, this appears to be the case with ebooks too, or at least, ebook formats, as every man and his dog* appears to have approached the knotty problem of on-line publishing with the same answer - "what is needed is a new format!" So most major readers have their own formats (Kindle, Sony, etc) which line up against a handful of open formats of various ages and reaches.

Choosing your format for digital publishing


I'm not going to rehash everything. Zak was fairly impartial, but being a solution providing kind a guy I need hard answers. Thankfully the tech-agony-Uncle at the Guardian has done a great job of providing a summary of the state of the ebook world in late 2011 and I'm happy to report that not much has changed by mid 2012, so that all holds true now. His answer, in summary, is ePub is probably best, then mobi and PDF. Or the proprietary format tied to your Apple or Amazon reader if you are the kind of person who wants an easy life and can't done faffing about about with conversion.

If conversion is your thing, then the only real option I could find, prompted by Zak's initial recommendation I should add, is Calibre. The consensus seems to be if you are a serious consumer of digital books then Calibre is the tool for you to manage your library from multiple sources devices. Provided, that is, that they are already in ebook formats.


Unfortunately, EPUB 3.0 doesn’t support illustrated books, so we can expect to see some fragmentation as Apple and other vendors innovate around these limitation.

It's not really just EPUB; consider the black and white screens of the regular Kindle and the fluid rendering of text you can see a clear bias toward text only content.

A quick conversion in Calibre proves the point. I took a PDF of an excellent little guide to learning communities by Kineo - a great example of layout and design contributing to the overall perception of the content - and ran it through Calibre. Here's how they looked on my phone. 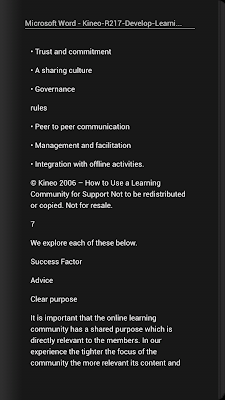 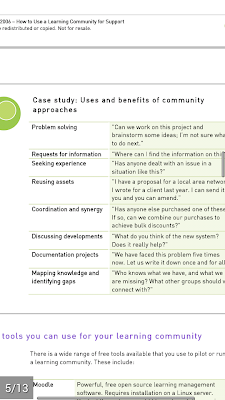 On the left the converted EPUB format is all over the shop. Calibre has tried its best, but the footer info has been picked up and is included in the body. Tables are removed, all the structure implied by colours and typefaces is lost. By comparison on the right, the original PDF version, scaled as you might expect for A4 paper is quite readable on my phone (though I should say it has a larger than average 4.3" screen). These screen shots have been shrunk to fit on the blog page which doesn't do their on-screen clarity justice. What you don't see here is the fact that the author, made more prominent by the way books are classified, has been picked up in the EPUB version as the file name and all sorts. Scrubby.

I'm not knocking Calibre, but it's not a publishing tool. It didn't like Word format as an input which would mean you'd need to use something else to get it there. Word to PDF to Calibre to whatever-format-you-want isn't quite the solution I am looking for.

So what do I take this all to mean?


I've done you a disservice if you've stuck by me through all of this post, because only now am I going to address the most important question for the learning designer: do I need to think about ebooks? And my answer has to be: no, probably not. It's simply not going to be worth it in nearly all instances.

You have a choice of writing your material in formats that work with different readers, or choosing the best. If your learners are predominantly accessing the content via a PC then the colour, paginated, predictably printable PDF is probably your best bet. In fact, any reader with a large color screen, so that include iPads and innumerable Android me-toos, will make a decent fist of reading PDFs. So you have covered by far the largest group of readers there.

At the other extreme, dedicated ebook readers, though increasingly numerous, are not as common as you would want them to be, unless you are creating training for librarians, so probably do not justify the exercise in creation. Where people do have them, they tend to be tied in to a specific publishing eco-system - iBooks or Amazon (and Google Play? Yeah, in Eric Schmidt's dreams) which is just another irritating barrier.

When you take in to consideration that very many of the readers out there are black and white, it imposes an additional limitation on your design. If you were in the lucky position of being able to furnish your readers with dedicated readers as part of your training package, then perhaps, but for the price of some of the colour screen readers you could just get a cheap Android tablet and be done with it. At least the recipient would be able to browse the internet, watch a few videos and play Angry Birds when they weren't reading.

So that leaves mobile phone users, by far the biggest mobile sector. As we saw above, many smartphones (now 50% of the market and only growing) will do a respectable job of reading PDFs, though will happily take most other formats you choose throw their way. Old-school 'feature' phones are not for reading. End of story.


So for me for the time being trusty old PDF is the best choice for publishing "ebooks" for learning. Some people don't like them - Jakob Nielsen still stands by his 2003 advice, but he's looking at it from a general web user's perspective and I think PDF is mature as a format and our technology  has made it much easier to use than back then.

For me, PDF wins because:
Still, that's just my opinion. I'd like to know yours if you care to share.

* "dog" in this instance meaning "international media publishing conglomerate".
** Non-porn and serious political variants of the latter two do exist, but they are barely touched by the great book reading public.
Posted by Dan at 6:08 pm